My kids travel really well on an airplane, but by car, not so much.  The longest road trip we’d ever done was to my sister’s house in Ohio.  Typically, by the time we make the 300-mile drive, all of our nerves are shot.  So, when I suggested we take a  road trip from Michigan to Nashville for Labor Day weekend, a 550-mile trip, my husband thought I had lost my mind. 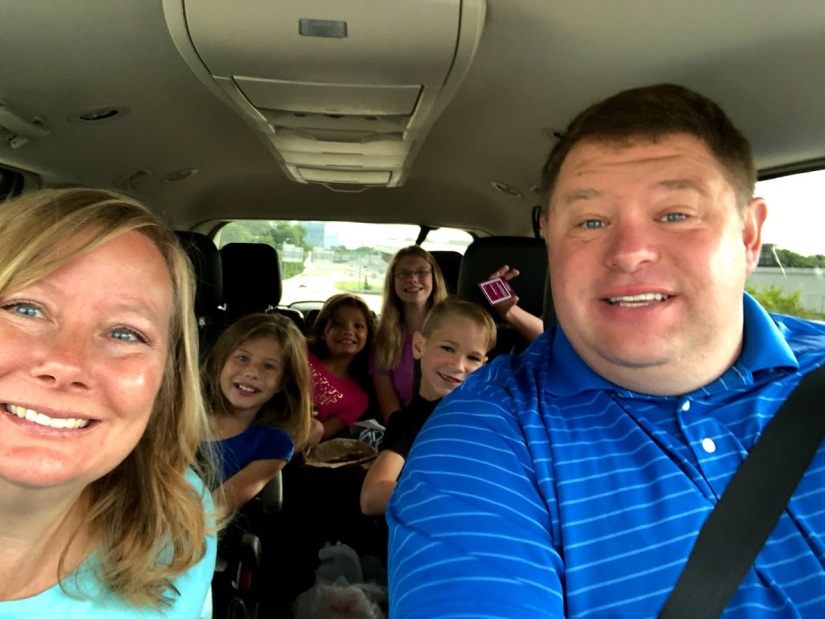 In order for this road trip to work, it needed to be at least bearable, otherwise, it would be our first and our last long road trip.  If it worked, this would open up a lot more traveling for us as a family.  Plane tickets for six are expensive!

As a former teacher, I knew I needed a behavior plan.  I wrote each child’s name on a binder clip with a Sharpie and attached it to the sun visor.  If anyone was fighting, whining, or intentionally annoying a sibling; their clip came down.  If their clip was still up on the hour, they got to choose a treat (individually wrapped mint, piece of gum, or bite-sized candy) from the small sand bucket I had in the passenger seat with me.

Let me tell you, IT WORKED!!  On the hour, we passed around the bucket o’ treats and each person got to pick one thing if their clip was still up.  Then we would put all the clips back up and start over again.   We have never had a more peaceful road trip in our lives.  There were a couple of kiddos that missed out on the hourly treat, but they only missed out once.  Score one for mom!

On our way to Nashville, our itinerary included a stop at Mammoth Caves in Kentucky.  The kids loved getting out of the van to stretch their legs by exploring the caves.  It’s worth doing.  It was fun and educational.  Plus, if you have a Fourth Grade child, there is a program called, Every Kid in A Park that allows you to get a FREE pass to every National Park in the US! 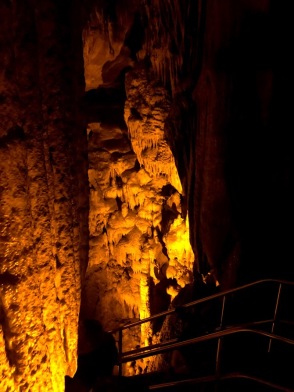 Once we made it to Nashville, the kids just wanted to swim in the pool at the hotel.  The next morning, we went out to explore the sights!  Our first stop was at this restaurant called the Pfunky Griddle, where we all got to make our own pancakes at the table with awesome toppings like pineapple, Nutella, M&M’s, or Reece’s Peanut Butter cups.  My kids were in pancake Heaven! 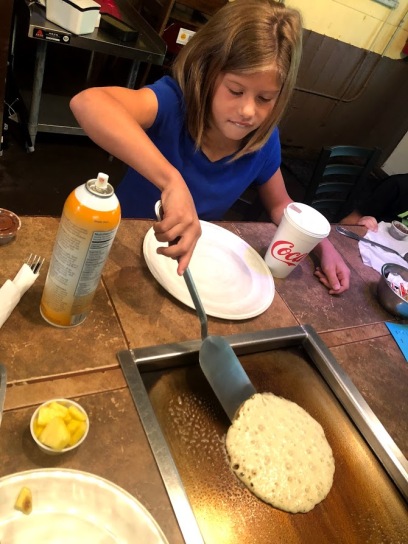 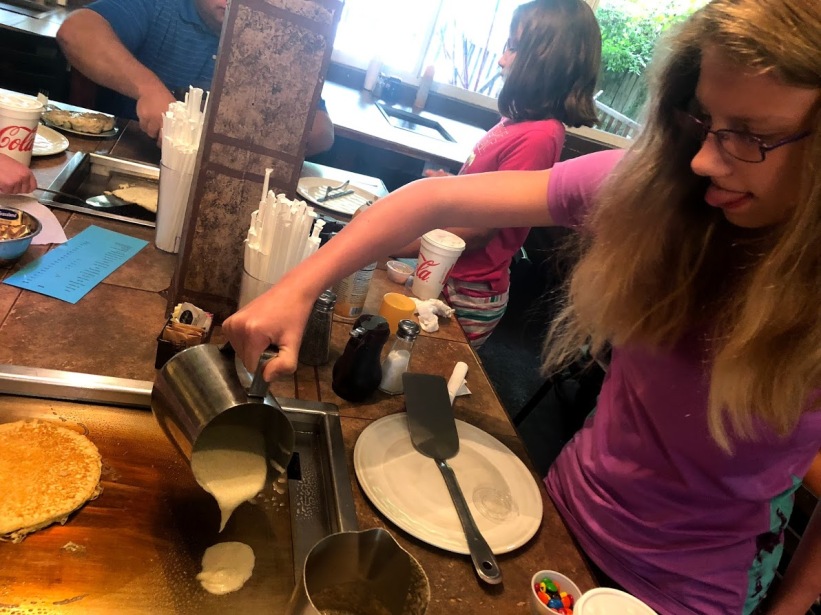 After breakfast, we explored the Parthenon.  On the first floor of the Parthenon is an art museum.  The second floor was the kids favorite part, with a 42-foot statue of Athena, just as it was in ancient Greece. It was quite impressive.

We headed to downtown Nashville where all the legendary country music bars are located.  We arrived around 10:30 on Saturday morning and the strip was hoppin’!

Every bar had a live band playing.  We stopped at Dierks Bentley’s Whiskey Row for pop and to let the kids experience a live show.  It was early, so we figured we were pretty safe with kids there, but I think Nashville is known for two things…country music and Bachelorette parties.  After we sat down, a bachelorette party came in with matching t-shirts carrying a large inflatable penis.  Luckily, my daughters are 10, 10, and 12 and they have a younger brother who isn’t shy, so it wasn’t their first time seeing a wanker, but it made for some interesting conversations at our table. 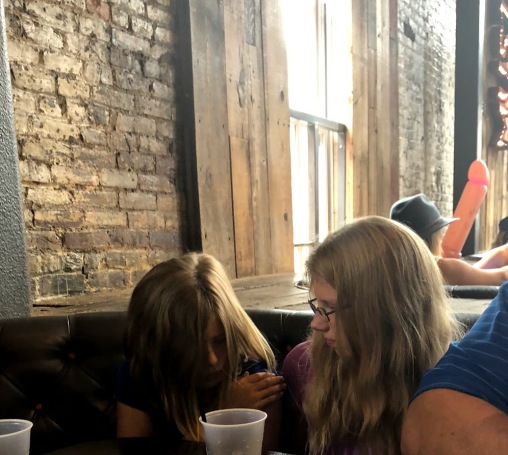 Our next stop was at the Musician’s Hall of Fame.  I bought the tickets on Groupon thinking it was the Country Music Hall of Fame, but that mistake led us to a very cool experience.  The Musicians Hall of Fame honors the talented musicians that are sometimes behind the scenes but have played on the greatest recordings of all time.  We had a blast playing with some of the instruments and learning about the musicians. It ended up being at the top of everyone’s list of favorite things we did in Nashville. 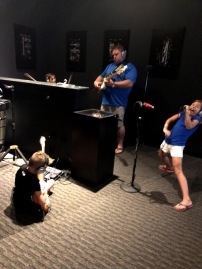 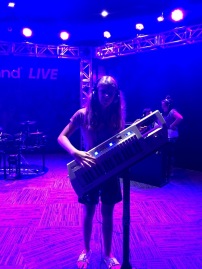 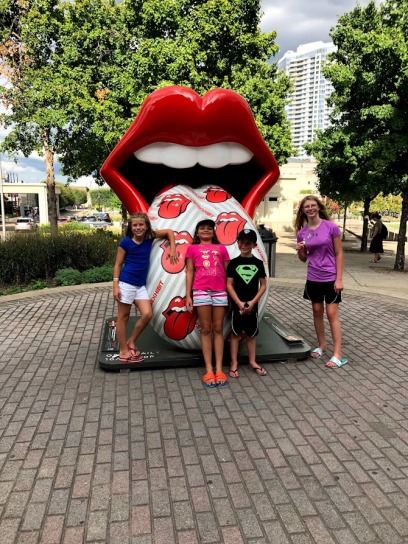 The main reason for this trip was to visit our daughter Keelie’s, birth mother.  We hadn’t seen her since our daughter was almost two-years-old, about ten years ago.  We had lost contact with her for several years as she moved around.  She’s now living in a small town between Nashville and Knoxville, Tennessee.

The next morning we got up and slowly started getting ready to make another two-hour drive over to the small town where Keelie’s birth mother lives.  Keelie said she was excited, but her hands told me that she was also a little nervous.  For Keelie, it was like she was meeting her birth mother for the first time.

We picked up Keelie’s birth mother from work and took her out to lunch. When we first got to the restaurant, Keelie was standing behind Wade, scratching his back. She has always been a daddy’s girl and I could see that she felt safe there. Thankfully, Keelie’s birth mother was patient and allowed Keelie to warm up to her on her own time. It didn’t take too long.

It was hotter than hades that day, so after lunch Keelie’s birthmom suggested we all go to a park with a lake and small water park to cool off.  We had a blast splashing around in the water. 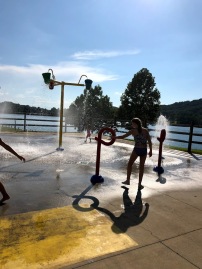 It was an amazing visit.  Just look at this picture of Keelie with her birth mom.

That, right there, made the whole trip worth it.

Hi, I'm Nicci. I'm married to my college sweetheart, Wade. It's been him and me since '93. I'm a mom to four gorgeous kids, a former teacher, and a wanna-be writer. I am currently working on a book about how our family came to be through open adoption and a children's book about Earth Day. View all posts by Nicci Rosted

2 thoughts on “Road Trip to Nashville with kids”